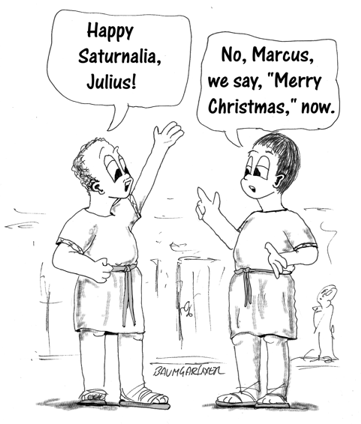 It is not easy to introduce a super-innovative concept to a large group of people. For example, introducing a completely new product or business model to a wide customer base may easily fail no matter how good the new product or business model may be. People as a rule do not like major change, especially if they do not understand its purpose. One strategy for dealing with this problem is to make the innovative new concept feel familiar. A suitable case study, for the holidays, of this approach is the introduction of Christianity to the pagan Romans.

In fourth century Rome, religious leaders were trying to sell the populace on a disruptively innovative new religion that replaced numerous gods with one rather dictatorial God and a son who died for the sins of the people. It was a far more serious and demanding religion than the paganism which was the norm at the time.

Threats Won't Work if Not Believable

Telling the people that they would burn in Hell if they did not believe in the new God would not work if people did not believe in the new God or the new Hell. Such scare tactics would come later, when Christianity was sufficiently wide spread that potential dissenters would be reluctant to take a chance on Hell. No, people would have to be enticed into Christianity rather than frightened into it. Fortunately, the Christian leaders had an idea on how to do exactly that.

During this era, the biggest Roman holiday was Saturnalia, a lawless, week long celebration full of debauchery, drinking and merry-making. Schools and government offices were closed. No one could be punished for damaging property or injuring people during the holiday. Slaves were treated to banquets by their masters. People got drunk and went, naked, from house to house singing. Gifts were given. Houses were decorated with pine tree branches.

In short, it was a holiday that largely went against the notions of Christianity. But, it was the most popular holiday of the year. And the new Christian leaders felt that if they could turn Saturnalia into a Christian event, it would go a long way towards convincing the people to give the new religion a go. The question was, how to tie the unchristian holiday with Christ.

Someone, no one knows who, had an idea. Declare that Jesus was born on 25 December, which marked the Roman coming of light; the time when days just begin to grow longer, and the end of the Saturnalia festival. Since the Bible itself is unclear on when Jesus was born, this was not even a lie − merely a convenience.

It worked, probably better than any of those earlier religious leaders expected. 1700 years later and December 25 is considered by all to be the birthdate of Jesus. We've even kept many of the pagan traditions of Saturnalia: closing of public offices as well as businesses; gift giving; decorating not merely with pine tree branches, but with entire pine trees; drinking and partying; and we still go singing from door to door albeit in full winter clothing − it's too cold to do it naked in the more Northern latitudes. To these pre-Christian traditions, we have added nativity scenes, midnight church services as the 24th becomes the 25th and the name "Christmas" rather than "Saturnalia".

Does this in any way detract from Christianity? Absolutely not! It was a clever ploy by early Christian leaders to ease pagans into Christianity and it worked. Today there an estimated 2.2 billion Christians on the planet and precious few pagans. And while Christmas is hardly a lawless time, it was and remains a relaxing break from work. And, if we are perfectly honest, more than a few Christmas parties are rather debouched and lawless! On a plus side, here in the west where culture has largely been influenced by Christianity, Christmas is a time when families get together, people wish each other a Merry Christmas  and good cheer is encouraged. Even many non-Christians, including atheists, celebrate Christmas as a traditional holiday if not a religious one.

But for those who are Christians, it is an important time and churches the world over hold special services at this time of the year.

What We Can Learn from Saturnalia

Although it was 300 years old, Christianity was a radically different, innovative new religion, especially to the Romans who were used to paying homage to a variety of gods who placed less strict rules on behaviour. Selling the innovative religion to the people was never going to be easy. But by taking popular aspects of paganism, such as the festival of Saturnalia, and turning it into a Christian holiday that retained aspects of the original holiday, made selling the innovation and encouraging change far easier than opening up new-fangled churches and trying to coax non-believers inside to worship a Jewish martyr nailed to a cross.

There is much to learn form this. If you need to launch an super-innovation concept or radical change across a large group of people − such as 1000s of employees or a large customer base − wrapping your change in positive, familiar behaviours, rituals and methods will make the selling and the innovative change far easier.

For example, if you are converting a largely manual process overseen by humans to a largely automated process run by computers, look at which bits of the manual process have the most meaning to employees and incorporate those into the new process even if they are unnecessary. Look also at the traditions. Maybe there is a tradition of teams going out for a drink together on the first Friday of the month to relax and joke about problems with the system. Keep that tradition even if the teams are no longer working together in the same way.

If your innovation involves buying up an innovate company, look at the valued rituals in the new company and incorporate them into the new, merged company. Those rituals are important to the worried employees of the acquisition and keeping the rituals will make the change easier for them. Very likely, these rituals will also be appreciated by employees in the buying company, for whom the rituals will be new.

Meanwhile, I offer you, your family and your loved ones my very best wishes for a happy Saturnalia! Oops, I mean "Christmas" of course!

I am neither a historian nor an expert on religion. Nor am I a promoter of any religion. If I have made mistakes in my article, I do apologise and would love to learn of them. Meanwhile, here is some further reading on the topic.