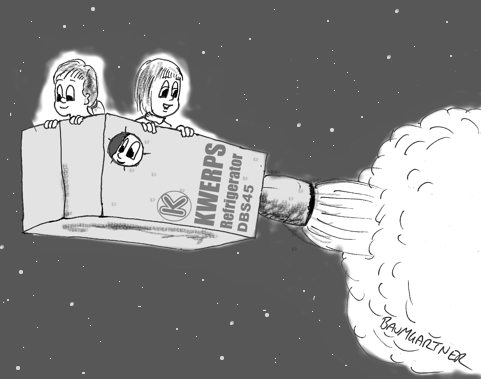 Learn Innovation from the Experts: Children

Creative ideas are the food of innovation and nearly every business leader claims innovation is critical to her company's future. Yet most businesses take a stupid approach to creativity. To understand why this is so, look at the most creative category of people on this planet: children. The way children work with ideas and the way businesspeople work with ideas are diametric opposites. And we all know which of those two groups is more successful with creativity! If businesses want to be more creative in order to innovate better, I suggest they start learning from children.

Consider a sunny Saturday morning in a nieghbourhood with lots of kids. One family gets a new washing machine and give the box to their daughter Cathy to play with. She invites a few friends around to join her. What if Cathy were to treat the box as a business manager might?

In a business environment, Cathy might initiate a brainstorm. She would explain to her friends that in order to get good ideas, it is important to do some fact finding and define the problem so that they can frame a suitable problem statement. She starts with analytical questions.

"Why do we want to play with the box?"

"Because it excites our imaginations!"

"Why does it excite our imaginations?"

"Because it is big enough to climb into and can be just about anything we want it to be!"

Why can it be can it be anything we want it to be?

Eventually, they formulate a problem statement: "In what ways might we utilise this box in play scenario?" Cathy puts this statement on a whiteboard and invites her friends to shout out ideas in a freewheeling session in which all ideas are welcome and criticism is prohibited (and, Cathy reminds Helene, that includes sticking your tongue out at Bobby when you don't like his idea).

Afterwards, ideas are combined and then each child is given some stickers to vote for her three best ideas. However, before they can do so, Cathy's father calls her home for dinner.

That's ridiculous, isn't it? No group of kids would play like that. Yet, that is often how we approach creativity at work: in a businesslike, serious, unplayful manner that focuses on capturing ideas and stifling them. No wonder businesspeople struggle to be creative!

Instead of struggling to be as unchildlike and unplayful as possible, why not learn from children? Why not make play integral to creativity and innovation? Not only is it likely to work better then the businesslike methods, but it is sure to be a lot more fun − a characteristic all too lacking in most workplaces today.

Let's try to take a children's perspective on business creativity and innovation. What might we learn? Here are just a few things.

When a child sees a big box, she starts imagining possibilities. The box could be a house, a caravan, a spaceship, a submarine, a time machine, a basket beneath an imaginary hot air balloon or just about anything. Her choices will probably be inspired by whatever interests her these days, the bedtime story she was read last night and favourite television programmes.

She can easily imagine the possibilities. An ordinary big box in adult eyes becomes all kinds of things in her eyes. As she imagines the possibilities, she also visualises what she can do in various scenarios. If the box is to be a spaceship, she might write "NASA" on the side, cut out some portholes and put pillows inside to be seats.

You can do the same thing. I call it imaginativefulness (a play on the term "mindfulness"), in which instead of being aware of all that is around you, you imagine all the possibilities in a given situation or scenario. In other words, just as Cathy imagines the various things she could do with her box, you can learn to imagine the various things you could do with a product, an interaction or a process.

For example, if you are trying to improve the efficiency of a process, visualise the process in your mind and play with it. Visualise it as a dance to suitable music. Is it an elegant process that deserves a waltz or is it harsh, loud process more suitable to techno music? Or, perhaps it is a process you could draw or build with construction toys.

If you want to improve a product, imagine all the possibilities for the product in your mind. How do people use it? How could they use it? What ridiculous things might they do with it? Need to improve a razor? Imagine shaving with various shapes and sizes. Imagine a little insect that runs across your face or your legs (depending on the kind of razor) and does the shaving for you. Imagine a hair magnate that pulls out hair. Imagine magic cream that makes the hair disappear.

When a group of kids are working out what to play, they do not defer criticism. They embrace it! They argue. They try to sell their ideas to the others. They boost their ideas and belittle other ideas.

Cathy decides she wants the box to be the basket of a hot air balloon and travel the world. She invites Glenda over to play with the box. But Glenda wants the box to be a motor caravan like her uncle has, with a cool, integrated interior. They argue and probably decide on one of three compromises. In the first compromise, they agree that the box will first be a balloon basket and then after a half hour, it will become a caravan. In the second compromise, they decide to make it a caravan suspended by a hot air balloon. In the third compromise they come up with an unrelated option that appeals to both of them: they decide that the balloon should be a spaceship.

You can do this too. While many creative thinking techniques prohibit criticism during idea generation, most kids are hypercritical of each others' ideas. Likewise, truly creative teams, such as Lennon and McCartney, Gilbert and Sullivan and Monty Python, were critical and argumentative in writing songs, musicals and comedy sketches. Moreover, research backs this up: criticism of creative ideas enhances creativity.

So, instead of nicely listing ideas without critical discussion, debate ideas immediately. Push your ideas and poke fun at other ideas. Keep at it until you find a creative compromise which might be to: try one idea and then the other; find an idea that incorporates both ideas; or find a completely different idea that makes everyone happy.

Once a group of kids has an idea, they do not turn their creativity off. As the children play with the box, they improvise with a healthy dose of imagination. Pillows can be seats, beds or weapons (in the event of an alien monster invasion, of course, a pillow makes a perfect weapon). A Frisbee can be a steering wheel. A snowsuit and a crash helmet can be a spacesuit. And so on.

Sometimes things won't work out. Mum gets ticked off when Cathy uses her motorcyclecrash helmet in a game. Maybe the kids decide it is better to draw a control panel on the box rather than to use a Frisbee. Maybe the whole spaceship thing is not working so well. Maybe it just gets boring after a while. Fortunately, with a blink of the eye and a reframing of the imagination, the spaceship can become anything else the kids want it to be. Then they can improvise and experiment all over again.

Businesspeople today seem obsessed with collecting lots of ideas and evaluating them. Ideas are chosen and then turned into structured projects that must be taken seriously. Surely, a better way would be to play with ideas. Experiment with them in a safe environment. Improvise. If one idea does not work out, try another one and play with it.

If you have got an idea for an improved process, recreate the process through dance or role-play or building models. Then play with your idea. How does it work? Tweak it and try again. Play with scenarios. If your idea does not work out, fix it or reject it and play with another idea.

Got a new product idea? Build a model with Styrofoam, building blocks, Mechano or anything. Then play with the model. When things do not work, fix them or change them. If the model does not work, take it to pieces and start again.

In a safe, playful environment where you can truly play with ideas, you will soon rediscover your childhood creativity, curiosity and playfulness. With these marvellous abilities, you can develop and experiment with ideas essentially risk-free. The result is a higher level of creativity in your innovation process and ideas that are playfully tested and improved − and so more likely to succeed than untested ideas captured in brainstorms, idea management and other idea traps.

Are you feeling lost? Not sure how to play with a particular situation? Don't know what a child would do? Then ask the experts! Ask your children or your nieces and nephews or friends' kids. Better still, ask all of them what they would do. It may cost you an ice cream or two, but you could probably write it off as a business expense and it's way cheaper than an advisor-facilitator like me!

But, I am also available. So, if you want to talk about play, get in touch!! I would love to chat!