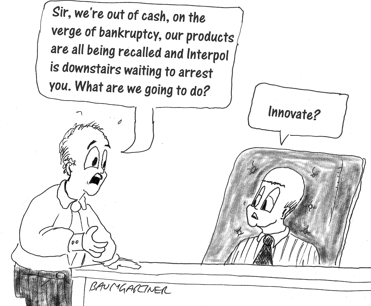 Why is it that big, moderately profitable companies tend to be poor at innovating while small start-ups do it easily? Why do companies in financial trouble innovate? Prospect theory may answer some of these questions.

Prospect theory was developed by Daniel Kahneman and Amos Tversky in 1979. It describes how people make decisions around economic risk and how people often do not interpret risk rationally, at least in economic terms. In particular, prospect theory shows that people are highly risk averse when it comes to potentially increasing their wealth, but risk seeking when dealing with potential economic loss. Moreover, there is a tendency for the average person to look at losses and gains in percentages rather than absolute terms. For example, a consumer will drive across town to save $5 on a $15 dollar appliance; but cannot be bothered to go out of her way to save $5 on a $125 appliance. In both cases, the absolute saving is the same. However, in the first example, it is one third of the cost of the product; whereas in the second example, it is only 4%.

Prospect theory would seem also to be applicable to innovation and, indeed, suggests that start-ups are likely to be more risk-seeking, and hence innovative, than established companies. A situation we know is generally the case.

Prospect theory started as a thought experiment which was backed up by substantial testing. It is widely accepted by economists today and even earned Kehneman a nobel prize. Tversky, sadly, died before he could share it.

Kahneman and Tversky found that if a group of people is offered the choice between:

About 80% of the subjects will choose option (a). In other words, when it comes to making money, the average person prefers a guaranteed gain rather than gamble on the possibility of winning a greater amount of money but with a threat of getting nothing.

However, when given a very similar choice:

Some 92% of the subjects will choose option (d). In other words, they would rather risk losing more money with a small chance of not losing anything.

From a logical perspective, of course, this does not make sense. Assuming people are using the same internal maths to evaluate the risk in both cases, we should see similar results. But of course humans are not logical. Moreover, most people are extremely poor at evaluating risk and especially threats.

The more innovative an idea is, the greater the risk. An innovative new product will require a new design, new production tooling, new packaging new marketing and more − all of which require investment. A moderately improved existing product, on the other hand, will require a much smaller investment. If the first fails, the costs are enormous. If the second fails the costs are trivial. Sure, it's profit potential is not so great as an exciting new product. But neither is the loss potential.

In short, highly innovative ideas (whether a new product or process) are by definition very different to the current situation. Thus an innovation's success-potential cannot easily be measured against existing cases. As a result, the more innovative an idea is, the harder it is to determine the result of its implementation. Let's call this "Baumgartner's Axiom of Innovative Risk".

An established business in normal times (ie. Not during an economic recession) usually generates a continuous and most likely slowly increasing income. Thus, when faced with diverting resources to implement an innovative idea, the manager is faced with a choice similar to (a) and (b) above. She can either not implement the idea and stay with the effectively guaranteed slowly increasing income (option a) or she can gamble by diverting resources and budget to implement the potentially innovative idea (option b) which offers an indeterminate likelihood of generating significantly more income than in the past and an equally indeterminate possibility of earning no income.

Not surprisingly, most managers opt for option (a). They avoid implementing the highly innovative idea and avoid its potential risk.

A typical start-up company, on the other hand, begins its existence losing money. Capital is spent on salaries, equipment, raw materials and marketing, but until sales are made, money is only leaving the company. Usually it takes one or more years before a start-up generates more income than it losses. Often it takes longer.

Thus a manager deciding whether or not to implement a potentially innovative idea is faced with a choice similar to (c) and (d) above. Not implementing the idea will result in a continued and predictable loss of income (option c). Implementing the idea, which may require additional resources, however, may result in a greater loss – if the idea does not succeed – or a profit if it succeeds (option d).

Risk in Start-ups Versus Established Companies

And indeed, start-up companies are almost synonymous with innovation, whereas well established companies are usually perceived as being risk averse and much less innovative. In a medium to large established firm, the most effective form of innovation is often to buy a smaller, innovative firm!

Of course there are exceptions. Established companies do periodically launch innovative new products and services. They sometimes develop innovative new operational processes. But as we saw in the beginning, prospect theory shows that not everyone takes the least risky option. A small percentage of people are willing to gamble. Not surprisingly, established, profitable companies most often become more innovative when a new CEO takes over − presumably because she is one of the risk-takers.

Interestingly, another area where we often see potentially innovative ideas being implemented is in companies facing serious financial problems. During the economic melt-down a few years ago, all three of America's main car manufacturers ran into serious financial difficulties. Two, General Motors and Chrysler, were bailed out by the government and expected to improve dramatically. Both companies came up with business plans far more innovative than anything either company has done in recent decades.

This fits within prospect theory. Faced with losing money (in this case everything) or taking risk in order to reduce that loss (ideally to no loss), the average person will take the second option. This is precisely what the managers at the two companies have opted to do. Both companies have since returned to profitbility.

Enron was a highly innovative company in its final years. It could trace its roots back to 1932 and for much of its history was a nondescript natural gas and electricity supplier. A number of mergers later and the company became Enron, a company which Fortune magazine called America's most innovative every year from 1996 to 2001. And Enron was innovative, both in terms of financial mismanagement as well as in terms of innovative products and services.

And, again, that follows with prospect theory. As Enron's management realised that the company was actually losing vast sums of money (rather than earning cash by the sackful as their financial statements claimed), it makes sense that the managers implemented risky, potentially innovative ideas in hopes of winning a gamble that would take the company from losing lots of money to breaking even or earning an income.

Of course that never happened at Enron. The company went spectacularly bankrupt in late 2001.

Lessons to Be Learned from Prospect Theory

Prospect theory, when applied to innovation, suggests that managers in profitable companies are likely to be risk averse and therefore are psychologically likely to reject potentially innovative ideas, particularly new product and service ideas that offer an opportunity to increase income. However, potentially innovative ideas which reduce loss, are more likely to be implemented. Thus, in an established firm, process efficiency ideas, which reduce costs, are more attractive to the typical human than are product ideas.

Likewise, loss making companies such as new start-ups or companies facing economic difficulties are more likely to embrace new product and service ideas as they offer the opportunity to reduce loss. However, start-ups with a young not-yet-defined corporate culture would seem more likely to innovate effectively than established companies that are suddenly losing money and need to innovate themselves out of trouble.

This is an edited version of an article that was published in Report 103 in 2009.