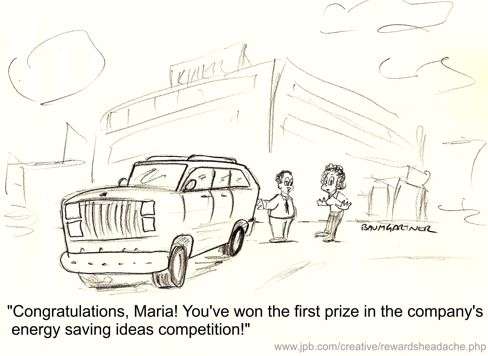 Rewards in an innovation initiative should be easy, shouldn't they? If someone has a good idea, give them a reward. Want to motivate people to participate in your suggestion scheme? Reward the submitters of the best ideas. Want great big ideas? Offer great big rewards! Right?

Like so many assumptions in innovation, all of the above are flawed at best and completely wrong at worst. In fact, rewarding innovation is a complex thing which, if you mess up, only makes matters worse. Let us look at some of the assumptions about innovation rewards, the flaws and what you should do.

Let us imagine your company has some kind of idea management or suggestion software to capture ideas from employees. Let us further imagine that you focus idea submission with ideas campaigns with specific innovation challenges. You want to motivate people to submit ideas. What are your options?

Best Is Not Creative

You may instinctively offer a reward for the best idea submitted. That seems logical, but if you use the word "best" or similar, you will discourage creative thinking in favour of conventional thinking as I explained in an article a while back. If you want creative ideas, you need to use words like "most creative" or "most original" or even "craziest" to encourage people to think differently and be more creative.

But, it is not quite that simple. if you reward the individual who submits the most creative idea, you discourage collaboration. If the individual knows that she will be rewarded for outstanding ideas and she of them believes she has such idea, why should she share it and build upon it with her colleagues when that could result in one of her colleagues getting the reward rather than her? This is a particular concern when one of the colleagues is senior to her. Managers are all too often rewarded for their team members' ideas.

However, if you reward teams for outstanding ideas, then you encourage collaboration. When a team member has an idea, she knows that she will do best to share the idea with her team members so they can build upon it and submit it as a team.

Another common approach, and one I used to encourage when I was involved in the idea management business, is to reward every idea submitted. Indeed, many idea management software products include a points system in which each idea submission results in points, irrespective of the quality of the idea. This seems a fine way to encourage participation in an ideas campaign -- and it is.

In fact, it is ironic that many innovation managers want to reduce the number of incremental ideas they have in storage (in databases, Excel Spreadsheets, written on paper, etc) but also want to encourage high levels of participation in ideas campaigns -- which will only exacerbate the situation. This is not their fault -- they have been swayed by the Cult of Ideas.

A better approach, then, would be to reward implemented ideas based on potential value. For example, you might create a scale running from one to five, with one being an incremental improvement idea and five being a business-transforming breakthrough innovation. In this scenario it is critically important to reward the entire team and not just the guy who suggested the original idea. The implementation of an idea, especially a big one, involves many people.

Such a rewards system has the advantage that it makes people think about their idea as not just an idea good for a few points, but as a potential innovation. In theory, anyway, employees would be less likely to submit ideas that are not relevant to the business (a common problem in many suggestion schemes) as it would be clear such ideas are unlikely to be implemented.

Of course, this raises the question of when to reward the implementation. Should you wait and see whether or not the idea succeeds or should you reward as soon as the idea is implemented. I suggest you reward sooner rather than later and reward for potential value rather than generated value. Although it is good that employees consider viability before submitting ideas, you want to encourage creativity and that means encouraging potentially risky ideas; ideas that have great value potential, but also have significant failure potential.

It would be easy to assume that bigger rewards would encourage bigger thinking and if you want big, breakthrough ideas from your colleagues, you should have big, generous rewards. But that is not true. In fact, the promise of big rewards results in reduced performance. It seems that when the rewards become very big, people stop focusing on developing good ideas for the benefit of their organisation and start focusing on the reward. This selfish thinking apparently reduces creative thinking.

In fact, small rewards that recognise contribution are more effective than big rewards. And giving people more autonomy and respect are the best, most motivating rewards of all. So, instead of offering an employee €10,000 for a brilliant idea -- give her the chance to prove herself by authorising her to develop her idea.

Daniel Pink explains the basics of motivation through rewards in his talk at the RCA in London a few years ago. You can watch it here.

And that puts us right back where we started from: rewards are complicated and many assumptions about them and their motivating power are flawed. If you want to include rewards in your innovation process, do your research first. And if you are unsure, offering no reward (or a very small reward) is probably the safest bet.