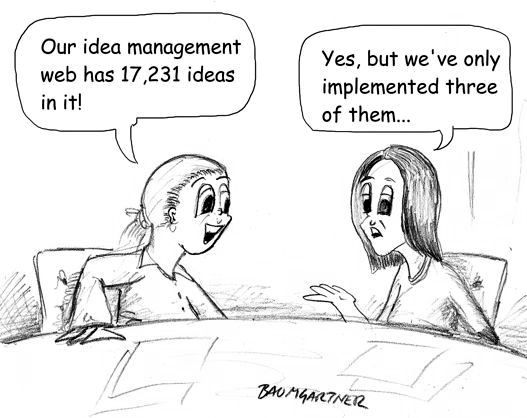 Most larger organisations have some kind of suggestion scheme, whether a simple web form for submitting ideas, a sophisticated idea management tool that provides lots of features, or something in between. Very likely, your firm has such a system too.

Fortunately, I have also learned some other things that I believe you will find more useful. Here they are...

If you just set up a software to capture ideas and promote it, you may succeed in capturing a lot of ideas. However, those ideas will be all over the place, you will see numerous duplicate ideas and a high percentage of ideas will be irrelevant to current business needs. This either results in a database that is soon bursting with unloved ideas -- or a lot of rejection notices going to the colleagues who submitted ideas and who may consequently be feeling unloved themselves.

Fortunately, most idea management software today allows you to set up campaigns that focus idea submission on particular issues. No matter what the sales-thug who sold you the software told you, this is the single most important feature of your software. Use it well!

Even if you only have a simple suggestion scheme that collects ideas, you can still use internal communications to promote campaigns and urge colleagues to submit ideas in response to the campaign issue.

If you have been through traditional creativity training, you may be tempted to formulate a traditional problem statement for your campaign. However, as I like to point out to the victims of my workshops, "problems are for losers; goals are for winners!" So, instead of thinking of your problem as a problem, think of it as a situation in need of a goal and formulate a goal statement. Some people avoid the entire problem statement/goal statement issue by using the word "challenge".

Many managers spend as much as 15 minutes formulating a challenge. This is nowhere near enough. Soon, hundreds or thousands of employees are going to be thinking about your goal statement and crafting ideas in response to it. A well thought out goal statement will bring better, more suitable ideas. Give it a couple of days at least -- a week would be even better. A really good goal statement makes it much more likely you will get viable ideas.

For advice on formulating goal statements, I suggest you look at Inner-Mind Creativity, which emphasises meditation over situations where you want creative ideas; and Anticonventional Thinking (ACT) which emphasises asking questions in order to deconstruct a goal as well as formulating "sexy goals" to encourage sexy, creative visions. These and similar techniques enable you to understand more deeply the nature of your goal and the kinds of ideas you really want.

When possible, formulate your goal statement into a call to action rather than a typical "In what ways might we..." or "How could we...?" statement. Calls to action are more urgent and more exciting. Compare:

Which do you feel will result in more exciting ideas?

Do you want some help with this? I would be happy to give you a few quick suggestions confidentially and free of charge. Contact me and explain your goal or situation in a few sentences.

2. Aim For Lots of Useable Ideas

Depending on the number of people using your suggestion scheme, you can have anywhere from a couple of dozen to a hundred or more ideas being submitted. If your aim is to identify the most creative idea, or a small number of creative ideas, and implement it, the result will be many, many unimplemented ideas and a corresponding number of people whose ideas are rejected or, more likely, buried in a database for future consideration.

This is both inefficient and a motivation killer. Once employees see that their ideas are seldom selected for further development, they will assume that participating in the suggestion scheme is a waste of time. Worse, they will be right.

On the other hand, if you run campaigns in which a large number of ideas are likely to be selected for development, you will be using the system far more efficiently as well as keeping your colleagues happier and more motivated. Here are some examples of such challenges:

All of these example goal challenges will result in lots of ideas you can use.

Better still, try to run campaigns in which idea submitters or their departments can implement ideas. This reduces the need of assigning idea implementation to people who might not be motivated to take action on a particular idea. It is also a motivator -- see below.

If you expect everyone in your company to submit ideas to your new idea management system, you are in for a disappointment. With good promotion, you can expect about 20-30% participation rates. Some managers, especially if they are reporting to demanding senior managers, are tempted to push participation levels higher, in extreme instances by mandating that everyone submit at least one idea per month. Such a mandate will result in a higher level of participation; and a higher level of mundane, conventional, boring ideas submitted by people motivated by obligation to submit an idea, any idea.

Part of the problem here is the conviction that innovation programmes should be judged by the number of ideas generated and participation levels rather than the value of innovations that have resulted from ideas. One, big creative vision that results in a revolutionary new product that turns your company into a legend is worth far more than 1000s of ideas sitting in a database and 100% participation in your suggestion scheme.

In fact, as you will discover, every idea submitted to the idea management system results in administrative work for you and your colleagues. Each idea should be reviewed and processed. If it is a viable idea, it needs to be escalated. If it is not viable, that should be communicated to the idea submitter. This all takes time. Indeed, the amount of administrative time required to process ideas is probably the number one killer of suggestion schemes.

4. Voting Is Worse than Useless, But You Are Probably Stuck with It

As I have written in the past, voting in on-line suggestion schemes is worse than useless. All it does is to create popular trends that bear no relationship to the quality or creativity of each idea.

Moreover, even if you ask people privately (so that they cannot see how others have responded) what they believe to be the best ideas, most people will chose incremental improvement ideas over truly creative ideas. I explain why here (The Danger of Voting for Ideas) and here (Best Ideas Are Never Very Creative) and here (When the Best Is Not the Best).

Unfortunately, you may very well be stuck with idea voting irrespective of whether or not you actually want it; either because it is a hard-coded function of the software your organisation has installed or because senior managers, users or others have insisted upon it. If so, do not despair! There is one thing you can do to make voting more effective, though not in the way you might think.

Most voting systems in suggestion scheme software are vague about what you should vote for. At best, they indicate you should vote for "the best ideas" or "your favourite ideas". At worst, no indication of voting criteria is given. Unfortunately, this does two things that harm creativity. First, it encourages people to think more conventionally and second, it results in people voting for conventional, incremental improvement ideas over truly creative ideas.

In a nutshell, this happens because users try to come up ideas that they believe their managers will like. They will base their thinking on past experience, suggesting ideas similar to those managers have liked in the past. Likewise, if they know that "favourite" ideas will win votes, they will choose ideas that appeal to the crowd, in other words, conventional ideas that revolve around corporate buzzwords. Such ideas are not usually very creative.

However, not all is lost. If you clarify that you want people to vote for the "most creative ideas", "the most unique ideas" or "the zaniest ideas", you encourage people to submit creative, unique and zany ideas, because they believe such ideas will win votes.

5. Watch Out for Topic Fixation

Another problem with voting in suggestion schemes is topic fixation. Imagine a user submits an idea that quickly wins a lot of votes. Other users, seeing all those votes, are likely to feel that submitting similar ideas will win them votes too. The result can be a clustering of very similar ideas. When this happens, you should communicate to participants that reformulating someone else's idea is not very creative and push people to pursue other lines of thinking. One surprisingly effective way to do this is to throw in some strange notions and ask participants to incorporate those notions.

For example you are running a campaign on improving office efficiency and you are seeing some topic fixation or too many conventional ideas. Suggest that for the next 24 hours, you want to see ideas that involve the colour blue; or ask users how a group of 5 year old children would do things. Unexpected and unusual instruction boost creativity by pushing people to think about the goal statement in new, unexpected ways.

It might seem intuitive that bigger rewards will result in better ideas, but this is not the case. Indeed, it seems generous rewards tend to kill motivation rather than drive it. So, do not sweat rewards, but do not ignore them either. Recognition, especially by senior management, is good. Empowering people to implement their ideas is even better. And, as noted, empowering others makes your work easier. But offering substantial cash rewards for great ideas will result in worse ideas than offering smaller, empowering rewards. Dan Pink explains the basics of rewards and motivation in this video of his talk at RSA in London.

What Do You Think?

There you have it, my advice to innovation managers and others overseeing suggestion schemes.

What do you think? Do have any suggestions to add? Do you think I've missed something? If so, let me know!