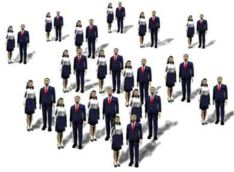 You Are the Problem

You are not stuck in traffic.
You are traffic
Get a bike. Break Free!

I thought this sign was brilliant, not least because my bicycle is my preferred means of transport for journeys under 10km or so. But it is also a handy reminder that we humans tend to blame problems on others and then expect others to solve those problems for us. Sadly, those others often have the same thoughts as us! They blame us and everyone else – but themselves – for the same problem. Meanwhile, everyone is waiting for someone else to solve the problem. But the truth is, if we are the problem, we also have a responsibility to solve the problem.

We expect government to come up with a solution to the traffic problem but, ironically, complain when they legislate effective solutions like road fees in big cities, increased tax on fuel or closing roads to traffic in favour of bicycles.

This attitude of being a part of a problem, but blaming others is not limited to traffic jams. When we find ourselves in long queues to watch a football match (you could watch the game on television home) or are stuck in a crowded lift (you could take the stairs), we see ourselves as victims, rather than potential problem solvers.

And that’s a pity. Creativity is about solving problems in new ways. Everyone is creative. If we all took responsibility for the problems in which we participate, there would be far fewer problems!

The thing with traffic jams and crowded lifts is that they are relatively local problems. However, the same situation is true of global problems, in particular: climate change. Most intelligent, knowledgeable people today accept that pollution is having a series effect on the global climate. On the global scale, it is leading to increasing warmth, which may well have disastrous consequences. On the local scale, we are seeing massive fluctuations in temperature and weather conditions. For city dwellers, this is merely inconvenient. For farmers who rely on consistent climatic conditions to grow crops, the consequences can be far worse – and this will eventually affect city dwellers through scarcity and increased prices of food products.

But with rare exception, we are all the problem. Heating and cooling your home, driving your car, throwing recyclables in the ordinary rubbish because it is easier – these all contribute to global warming. Yet most of us expect our government and energy suppliers not only to solve the problem on our behalves, but to do so in a way that will not inconvenience us. For instance, no one likes the idea of taxing fossil fuels, to reflect the cost of the damage they are doing to the environment, and using that income to repair the damage caused by those fossil fuels as well as to subsidise research into cleaner energies.

Such a solution is eminently logical, but it would inconvenience most people by increasing their costs for electricity, petrol and heating.