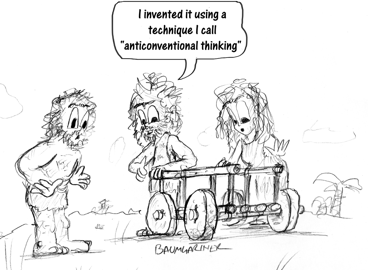 Defining creativity is no easy task, even for someone like me who has been writing about it and using it for years. Nevertheless, I use a rather scientific concept to define creativity:

Creativity is combining two or more existing notions in your mind in order to create an all new notion.

In other words, creativity is about playing with bits and pieces of information that are stored away in your mind and putting two or more of them together in an all new way to. This is fascinating when you think about it. Every idea we have ever had, from the dawn of the human race until today, has been built on existing ideas. At some point, a very long time ago, a homo sapien found that if she put a chunk of animal on the fire, it tasted better, stayed edible longer and she needed to eat less frequently when she ate cooked foods.

At some point, another homo sapien put meat and plants in a bowl of water and invented soup. Somewhere else, an early human noticed how round rocks rolled more easily and came up with the idea for a wheel. Another combined the notions of a two wheels, holes in each and a long stick to serve as an axle. And so on and so on and so on. This continual building of ideas and implementing those ideas has led to the marvellous, high technology world we live in today. None of those ideas were magic. None suddenly appeared out of nowhere and for no reason. Creative men and women like yourself combined notions in the heads in order to build new notions which became ideas which became visions which became reality.

I have been interested in creativity for a long time. All my life, people have told me that I am very creative (or sometimes they tell me that I am crazy). I have been an artist and a writer. I notice that in day to day life, I seem to have far more ideas and more imaginative ideas than others.

So, I became curious about what made me different to others and whether that difference was something genetic or whether it was to do with how I was brought up. More importantly, I wondered if I could learn from myself to help others think more creatively.

The result has been twofold. Firstly, it has been a flood of articles on creativity, the first of which Ten Steps to Boost Your Creativity, I wrote rather less than seriously in 1996. Nevertheless, for nearly 20 years now, it has been the most popular page on the jpb.com web site.

Secondly, I devised anticonventional thinking (ACT) -- a somewhat structured creative thinking method that applied what I had learned about myself, artists, writers and business people.

I have shared most of my thinking on creativity in these articles. Over the years, some of my thinking has changed. I feel that brainstorming and creative problem solving (a more developed version of brainstorming) is highly flawed and inhibits creative thinking. Nevertheless, you will find articles about both methods among the articles in this section of the web site.

In any event, enjoy, learn and share your thoughts on creativity with me. I would love to know your thinking.