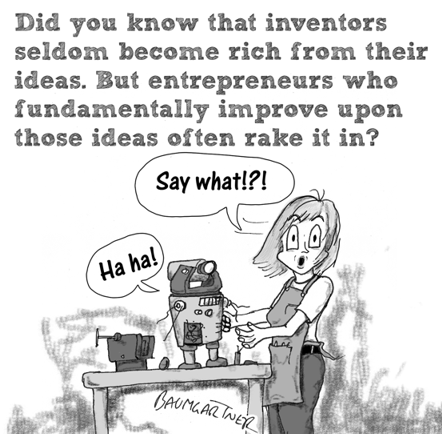 It Pays Better to Improve Inventions than to Invent

Companies become innovators by inventing exciting, all new products, launching them upon the world and becoming stinking rich as a result of their ideas. That's what innovation is all about, right?

Wrong! Most companies that invent truly new products and services − and try to profit from them − actually go bankrupt and are soon forgotten. It is the companies that copy those inventors' ideas, and fundamentally improve upon those ideas, that tend to become known as innovators − and get stinking rich.

Let's look at a few examples.

Do you remember Archie? It was the Internet's first search engine. It even predated the web. Archie enabled early Internet users to search on-line archives which at that time were basically file directories accessible by FTP (file transfer protocol). The world wide web became a reality in 1993 and not long afterwards, Aliweb was launched as a web directory. In 1994, Yahoo was established, not as a search engine, but as a web directory. I still remember submitting new web pages to them during their early days. Excite, probably the first commercial search engine, was launched not long afterwards. Lycos, Altavista and others soon followed.

If you used a search engine in the 1990s, you probably remember that they tended to deliver loads of results, nearly all of which were completely irrelevant to what you were really looking for. To make matters worse, once marketers recognised the potential of search engines, they quickly figured out how to rig the system and, as a result, any search term you entered would lead to an amazing number of completely irrelevant promotions, a surprising number of which were pornographic.

About this time, a couple of students at Stanford University had an idea. What if you treated web search like academic search in which papers that received a lot of citations were assumed to be more important than those that did not receive so many citations? Their university project became Google. It was far from being the first search engine. But it did one thing no other search engine of the time did well: it actually found what you were looking for.

Today, those early search engines are mostly long forgotten and Google has become a huge company founded not upon invention, but upon fundamentally improving an existing product. (If you are interested in early search engine history, this article is worth reading)

Likewise, Facebook was not the first friend-based social media space on the web. Even before the web existed, there were a  number on-line bulletin board systems (BBS) that allowed people to post messages, share files (often, truth be known, pirated software and games) and chat. This is how America on Line (AOL) and Compuserve got started. In addition, there were many techies who set up their own BBS for small communities. I explored a few such systems in the early 90s.

Early web based social media included Classmates.com and Friendster. MySpace, launched in 2003, became the biggest social network in the world in 2008 when it surpassed Google as the most visited website in the USA. Indeed, when Facebook first expanded outside of Universities and to the public, MySpace was all the rage and many people questioned the need for yet another social media site. Yet, Facebook was fundamentally better in a few simple ways. Perhaps most importantly, users used their real names. Secondly, because it started as a Harvard University networking tool and expanded slowly to other campuses, it was perceived as a tool for networking with existing friends rather than finding new friends with weird user-names. Thirdly, apps that people could play together on Facebook kept people on Facebook.

Today, of course, MySpace and Friendster are largely forgotten and Facebook rules the social media space in a big way.

Prototype electric cars first showed up in the 1820s and 1830s and if you hopped into a horseless London cab at the end of the 19th century, it was probably battery powered. Indeed, had history been a bit different, we might all be driving electric cars today and only know internal combustion engine vehicles from museums. But, of course, it did not happen that way. Petrol powered cars eventually became more popular, in spite of being noisier, smellier and harder to start. Their longer range and greater speed made them a better alternative to battery powered cars.

In  the years since then, petrol and diesel engine cars have the norm. Manufacturers have from time to time experimented with battery powered cars and half-heartedly tried to market them. Usually, the cars have been small, lightweight cars with short ranges and few comforts. The belief was that no one would want their main family car to be reliant on battery recharges, but people might be keen on a small battery powered second car for shopping and other local errands. However, the cost of batteries meant these simple runabouts cost more to buy than better equipped petrol and diesel engine cars. So, they never achieved much popularity.

Elon Musk had a different idea. He reckoned that people would be more comfortable paying a premium for a luxury electric car with a long range than they would be paying a premium for an underpowered car with a short range and few comforts. So he set up Tesla to make high-end battery powered cars with lots of cool gadgets. Being in the luxury car price bracket allowed the cars to have lots of expensive batteries in them and that enabled the cars to drive further between recharges. Moreover, Tesla set up recharging stations to make things even easier for their customers. However, the electric running gear of Tesla cars is no substantial innovation over other recent electric cars.

Indeed, had Mercedes Benz or Lexus had the same idea, they probably could have built better luxury electric cars using a lot of existing parts. But, they did not have the idea. Now they are scrambling to catch up.

So, Mr Musk did not invent the electric car. But he came up with a fundamental conceptual improvement over previous electric cars and that has led to tremendous success for Tesla and Mr Musk.

1. Do not invent − improve inventions

The first lesson to learn here is that inventing great new products often does not lead to wealth. Indeed, it tends to lead to bankruptcy and being forgotten. Rather, it is the companies that fundamentally improve upon existing products that tend to be most successful.

2. Innovate outside of your field of expertise

Moreover, these funademental improvers are almost always new to the field in which they launch their products. They are either start-ups, as in the examples we've discussed, or they are established companies moving into new territory. Take, for example, Apple. Their iPods were their first foray into the field of MP3 players, an already well established field. However, their iPods were more elegant, more stylish and easier to use than any existing product.

Likewise, Google's android operating system has become the default operating system of nearly every smartphone that is not made by Apple. Yet, prior to the launch of android, Google had not been in the smart phone business.

3. If you must invent, give your invention away

If you are an inventor who has come up with a radically new idea, I suggest you give it away rather than try to profit from it. Linus Torvalds gave away his Linux operating system and is considered something of a hero and founding father of the open source community. He may not be stinking rich, but earns a good income and is hugely respected. Had he tried to sell his product, I suspect Microsoft or Oracle or some other company would have eaten him for lunch.

Tim Berners-Lee invented the protocols behind the world wide web and also made them publically available as standards. He's famous, widely respected and earns far more than I do giving speeches. Had he tried to patent and sell his idea, well, the world would probably be a different place now. He'd probably be bankrupt and some big IT company would own the network.